How To Take A Screen Shot: All Three Methods

I see a lot of people on Howrse asking about thus or getting locked in the game play forum for asking this, so I thought it was time I did a little tutorial.
There's three methods, all of which are free, require varying levels of work or time, and offer various cool features. I've put them in order, starting with three, and counting down to what I consider the #1 method. I've labeled them bronze, silver, and gold. :) 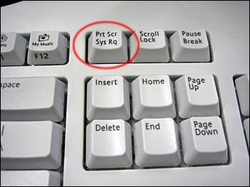 This method only works on Windows computers! Apple products don't do this, to the best of my knowledge.
On your keyboard you'll see a button, in some obscure corner, called Prt Sc, or Print Sc, or Prt Screen, or Prt Scr Sys Rq, or some other such bizarre letter combo that doesn't appear to mean anything. Everyone calls it the Print Screen button.
Pressing the print screen button is the easiest way, but also the biggest trade off. Basically, get all your ducks in a row and press Prt Sc and it copies everything on your screen, including your task bar and your browser tabs and everything, to your clipboard in an image file.
You can then go into Paint, press the drop-down arrow beside the word "Paste" (In Windows 7 or newer) and click the "Paste" button (NOT the Paste From button!!) and you'll get the image into paint where you can crop it and draw on it and all that stuff. Trouble is, paint is far from a good editing program and its results are very tedious to make, somewhat blurry, and pretty much not up to par. Here's an example screen shot I took:

Funny Side Note: I made two typos on that screenshot, including in the sentence where I said how being unable to edit your text again was a drawback. XD

#2: The Silver Method, AKA Owely

Owely is the original program of mine, I've used it for as as long as I can remember as my family has. It's a very nice time tested tool, it does have its draw backs though.
It's available for Windows 2000 or newer, And also Mac and Linux, but I can't view the system requirements for those OS because I'm on a Windows 7. :p It is free and totally safe, but your antivirus may freak out the first time you run it (and/or firewall, My Comodo Firewall and Avast Antivirus had a stroke the first time I used it, on my XP and 7) but it's a false positive- don't worry. If you wanna check for yourself Kim Komando recommends it and if she says it's safe it likely is.

The way Owely works?
You can go to this website to learn more or download but in general, Owely must be launched every time you turn your computer off all the way. I keep him pinned to my task bar and start menu... anyway when launched he appears in your system tray (by the time in the bottom right)and you'll have to access your settings to make him appear all the time (click the little arrow in the system tray and click customize).

Evernote is an amazing program for writing that is free and lets you sync your writing so you can access it ANYWHERE.
You can also get a web browser extension called The Evernote Web Clipper. You can get it for Chrome, Safari, Opera, Firefox, and it comes pre installed with Evernote for Internet Explorer.
Evernote is free and useful, and the Webclipper Screenshot tool is an amazing option.

The pros: It's free, easy, offers the blur option which no other does, gives very "professional" results.
the cons: You have to have Evernote (which I highly recommend anyway, you have no idea how many times I have used to help me with TBH).
Click Here For The Clipper!
HTML Comment Box is loading comments...
yoursite.com page title . . . . . .